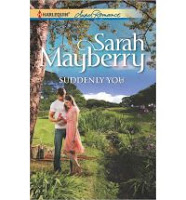 Despite my love for romance novels of every shape and size, I have never read a category romance.  Category romances are those thin, cheesy-looking paperbacks that you see at the supermarket.  They cost much less than a regular paperback and come as part of a "line," such as Harlequin SuperRomance or Blaze or whatever.  There are dozens of them released every month, and they tend to be a lot less substantial, story-wise, than regular mass-market romance novels.  They make a lot of money and get a lot of attention from my favorite romance blogs, but somehow I have never been brave enough to pick one up.  They are daunting to me.  How do you know where to start?

Luckily, I listen to the Dear Bitches, Smart Authors podcast (hosted by Sarah Wendell from Smart Bitches Trashy Books and Jane from Dear Author).  They often talk about romances from every subsection of the genre, including categories.  And they are always talking about their mutual love of Sarah Mayberry.  After I heard them praise a book called Suddenly You a month or two ago, I decided I'd give this category thing a try.  So I picked up Suddenly You from the library and gave it a spin.

It was a good experience.  The story revolves around mechanic/sometimes-bad-boy Harry Porter and his attraction to single mother Pippa White, who once dated and was mistreated by Harry's best friend.  Pippa struggles to raise her infant daughter and keep afloat financially, and she takes Harry up on his offer to help her fix her car and ramshackle house.  They can't fight their mutual attraction, though, and things get complicated when Harry realizes just what an asshole his best friend has been to Pippa in the last two years.  The story definitely feels character-based, which I appreciated.  Harry and Pippa's mistakes are based on their personalities (which, admittedly, are not particularly complex but which are pleasant to read about nonetheless).  Mayberry writes in a natural style, brief and to-the-point.  Overall, it was a perfectly reasonable and entertaining way to spend a few hours.

Suddenly You might not stick with me forever.  I enjoyed the interactions between Harry and Pippa, as well as the way the story lets them make actual adult decisions about their lives.  That doesn't mean it's going to end up on a favorite books list anytime soon, though.  Considering that I read romance just to spend a few comfortable hours in a fictional world that has nothing to do with my life as a frustrated graduate student, though, that's not a bad thing.  Best of all, I can now say I have actually read a category romance.  And you know what?  I would totally read another one.
Posted by Beth at 5:35 PM