Where Things Are Awesome 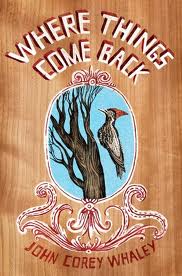 Book Reviewed: Where Things Come Back, by John Corey Whaley

My friend Amy (she of the often-great book recommendations, and the author of this great blog) recommended John Corey Whaley's award-winning debut teen novel to me a few weeks ago.  She sold me with three things that are important to the book's protagonist, Cullen Witter: Sufjan Stevens, zombies, and the use of the word ass-hat (one of my all time favorite words in the world, by the way).  I loaded into onto my Kindle at once, and although it took me awhile to finish because of boring grad school stuff, I have to admit: This book is pretty damn good.

I knew I was going to love this book only a few pages in, when Cullen says this about himself:


Being seventeen and bored in a small town, I like to pretend sometimes that I'm a pessimist.  This is the way it is and nothing can sway me from that.  Life sucks most of the time.  Everything is bullshit.  High school sucks.  You go to school, work for fifty years, then you die.  Only I can't seem to keep that up for too long before my natural urge to idealize goes into effect.  I can't seem to be a pessimist long enough to overlook the possibility of things being overwhelmingly good.


I'm not sure I've ever read anything that so perfectly describes the inside of the teenage brain.  This passage could have been written by me at the age of seventeen (not that I would have put it together in such a simple and eloquent way as Whaley).  Nothing is worse than the realization that you're not the cynic you think you are.  The world hurts a hell of a lot more when you're an idealist.

And this summer of Cullen's life hurts a whole lot.  Not long after some annoying bird expert claims to have seen the long-thought-extinct Lazarus woodpecker in the Witter's small Arkansas town, Cullen's smart and thoughtful little brother, Gabriel, goes missing.  Intercut with this story is that of a young Christian missionary, the missionary's impressionable college roommate, and the pain of a romance gone bad.  It's hard to see how these two separate stories are going to connect, but they come together in an incredibly poignant way in the end.

Cullen and the people around him are what make this book.  Cullen is funny and sincere but because he wants to cut himself off from the horrors of the world around him, he often slips into a third-person voice that helps distance himself.  What could have seemed like a gimmick (particularly as Cullen often imagines the people around him becoming zombies at the same time) instead pays off wonderfully in the book's moving final paragraphs.  This novel also features one of my new favorite BFF characters, Lucas Cader.  Lucas Cader is the strongest of friends, charming and loyal, but with his own tragic backstory that only makes him that much more interesting.  And Cullen's mother is really well-written.  Mother characters in teen novels aren't always portrayed well, but Whaley gives Mrs. Witter a rich inner life of which we only catch brief but enlightening glimpses.

Where Things Come Back is a very rewarding book.  I've thought of it often since finishing it last week, about the strength of its brevity, its tricky narrative moves, and its warm view of teenagers in a small rural town.  Also, it has the best use of ass-hat I've yet encountered in literature.  I'm going to be throwing this one in with The Book Thief as a great teen read that should be experienced by all age groups.
Posted by Beth at 4:20 PM